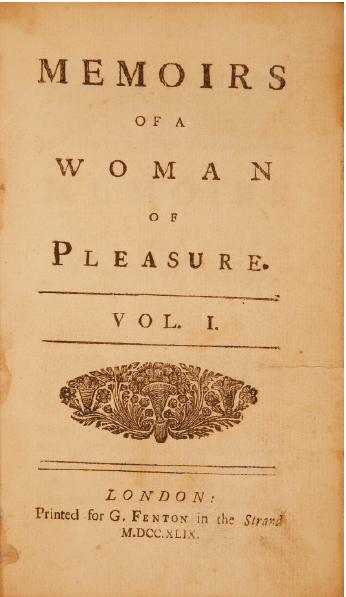 Fanny Hill must be thrilled. After plying her trade with varying degrees of success she now commands $54,000-$80,000 to spend an intimate evening with her. Reading a scarce, true first edition copy of her memoirs, that is.

"Cleland [1710-1789] composed his novel while serving a sentence for debt in the Fleet Prison. According to his own testimony, it was written largely from boredom and, the early chapters anyway, was based on an idea '...originally given me by a young gentleman of the greatest hopes I ever knew, above eighteen years ago, on an occasion immaterial to mention here.' Volume one appeared about November 1748, and volume two was published in early February of the following year. Both were printed by Thomas Parker for Ralph Griffiths and advertised in the press at three shillings each volume.

During this period, Cleland, at the suggestion of Ralph Griffiths, excised the majority of the offensive material - of which there was plenty - and in 1750 this abridged edition was published under the title Memoirs of Fanny Hill. "The expurgated version seems not to have found any more favour than the complete first edition for it was suppressed very quickly" (ibid). As a result the self-censored 1750 edition is even rarer than the complete first, with only one copy, in the British Library (call # C.133.a.9), known to have survived its ban.

Despite arrests and the prospect of trial, however, the cases against Cleland et al were not, apparently, pursued.

The bibliographical history of this book is quite convoluted and it was not until David Foxon's essay in his Libertine Literature in England (1965), reprinted from The Book Collector (Autumn 1963), that the various editions - four prime suspects - were sorted out and the true first ID'd.

Foxon's description of the true first:

Memoirs of a Woman of Pleasure was illegal in the United States until the Supreme Court's obscenity decision of 1964 cleared it for open publication. The first legit edition was published in 1965 by G.P. Putnam's Sons in New York but it does not contain the two-paragraphs in volume two  of the true first describing a homosexual encounter, the infamous "sodomitical" tableau. That scene was excised from all subsequent 18th and 19th century editions and did not reappear until Maurice Girodias, under his deceased father, Jack Kahane's, Obelisk Press imprint, published Memoirs of Fanny Hill in 1950 and included it.

The true  first edition of Memoirs of a Woman of Pleasure consisted of only 750 copies which sold for six shillings (2 vols x 3s). Its maximum profit could not have been more than £100. Cleland is said to have received a grand total of £20.

He wrote it out of boredom while in debtor's prison, not out of any sense of literary calling or art. but, rather, for a quick buck.

"One of those booksellers who disgrace the profession offered him a temporary relief for writing the work above alluded to, which brought stigma on his name, which time has not obliterated, and which will be consigned to his memory whilst its poisonous contents are in circulation" (John Nichols, The Gentleman's Magazine, February 1789, p. 180).

It may be said that Cleland, like his comely creation, Fanny Hill, was a whore, and a cheap one, too. The £20 Cleland earned was a pittance compared to the £840 he owed. Yet "No man but a blockhead ever wrote, except for money," as Samuel Johnson famously said. Poverty tends to focus a writer's attention.

Cleland was "a man who would have been merely another minor 18th-century literary figure had it not been that the shortage of a bob or two had forced him to write a sensational novel" (op cit,  Kearney).

A sensational novel that, in its true first edition, now fetches a sensational price.
__________